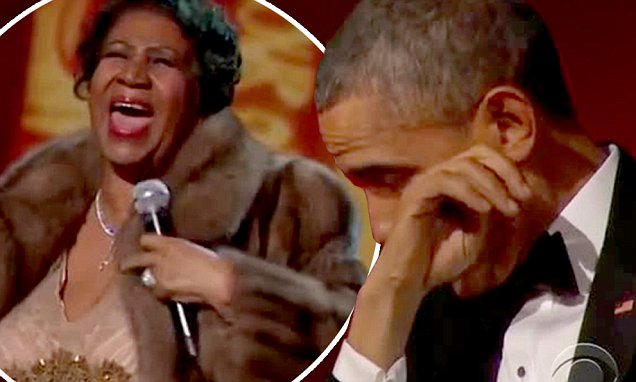 If you want to end 2015 (or indeed start 2016) in proper soul fashion, then seek out the video footage of ARETHA FRANKLIN singing ‘You Make Me Feel Like A Natural Woman’ at the 38th Annual Kennedy Centre Honours, held on Dec. 6th in Washington, D.C.. The footage was broadcast earlier this week and is now easily accessible on the internet.

The aim of the evening was to celebrate the cultural achievements of Rita Moreno, George Lucas, Cicely Tyson, Seiji Ozawa and a certain Carole King. However it was the so aptly named Queen Of Soul who stole the show.

Resplendent in a fur coat she sang ‘Natural Woman’ in honour of Ms King and her rendition not only moved Ms King to tears but also brought tears to the eys of the guest of honour – Barack Obama. Sitting next to his wife, the President was clearly moved by Aretha’s soulful, honest performance… and who wouldn’t be?

Contenders come and go, but Ms Franklin proved that there really is only one Queen of Soul and if you’re not moved to tears by this very special performance you probably don’t understand where soul music is coming from!