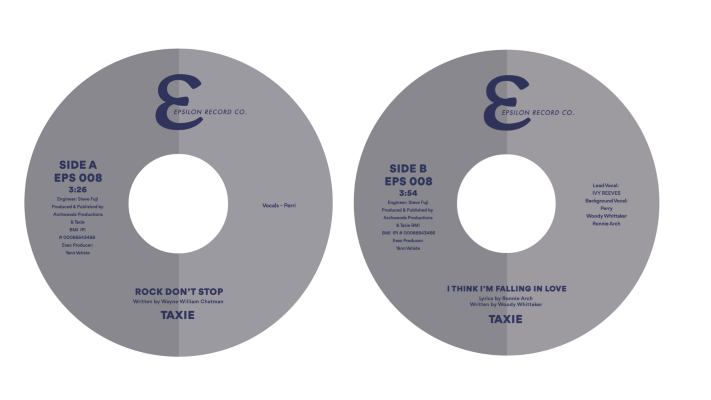 London-based EPSILON RECORDS is one of a growing number of boutique vinyl issuing labels that specialise in making available rare and esoteric soul and dance and their current catalogue offers plenty of gems.

Epsilon’s latest release is typical of what they offer – it’s a reissue of a pair of rare 1978 tunes from a band called TAXIE. Taxie were a trio – Woody Whittaker, Ronnie Arch, and Wayne Chatman – who also had a music production company called Cabfare Productions.  Taxie , we’re told, stood for Talented…Artist …Xclusively…In …Entertainment! Now you know!

Taxie/Cabfare worked in and around Oakland, California and shared stages with people Stevie Wonder, Dennis Edwards, and the Mary Jane Girls. They enjoyed  little success in their own right but some of their tunes (you guessed it!) have become collectable. So now the nice Epsilon people have put two of ‘em together as a single… they are’ROCK DON’T STOP’ and ‘I THINK I’M FALLING IN LOVE’

The former is a tough, disco outing that has appeared on a few compilations already but this version is a “new” alternative mix. ‘I Think I’m falling In Love’ is different altogether – a sweet, Philly flavoured ballad that gets a big thumbs up here @SJF.

We believe that Epsilon have recently gone into a loose arrangement with Tesla Groove and Cannonball Records to create “Stream” – a little imprint dedicated to bring  “the most elusive sounds on Earth to the decks of Black Music fans around the world.”