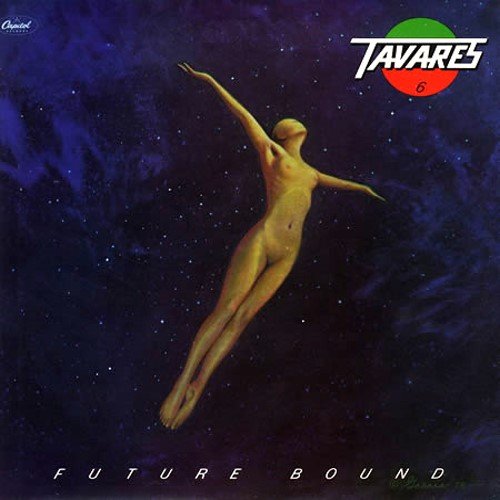 Despite a recording CV that oozes quality and consistency TAVARES never quite made the soul premier league. However, the brothers’ work is revered by soul connoisseurs and lovers of sweet soul harmony. Luckily their back catalogue has been handled sympathetically by the reissue labels and most of the group’s classic albums are readily available. Now specialist label Caroline International (in association with SoulMusic Records) have reissued two more Tavares sets… 1978’s ‘Future Bound’ and ‘Loveline’ from ’81.

‘Future Bound’ was Tavares’ sixth studio album and was produced by Freddie Perren who’d previously helmed some of their biggest hits. The long player’s key track is the family’s take on the Bee Gees’ tune ‘More Than A Woman’. The Gibbs, it seems, were big fans of Tavares and wanted them to feature on the soundtrack to ‘Saturday Night Fever’ and naturally the new England outfit were delighted to oblige. Movie buffs will know that when the film opened the song was featured twice – by both the Bee Gees and Tavares but the exposure was enough to ensure that the soul/disco version went top 40.

The album’s other big single was the joyous ‘The Ghost Of Love’ which encapsulates everything good about Tavares… lovely harmonies, sweeping rhythms and bags and bags of optimism. The long player’s other major gem is the delightful ‘Honey Can I’, a perfect soul group artefact and, it seems, the song remains one of the group’s own especial favourites.

Released in 1981, ‘Loveline’ was Tavares’ tenth long player and their last for Capitol Records with whom they’d enjoyed their biggest successes. At the time Capitol was in a state of transition while the group knew the set was to be their last for the major. Consequently the album has something of an end of term, rag bag feeling about it. That said the album boasts several superb ballads like the Brenda Russell-penned ‘God Bless You’, Al Jarreau’s ‘Right Back In Your Arms’ and the super smooth ‘Turn Out The Nightlight’ which was the album’s leadoff single.

The album’s other single was the up-temp title tune. Penned by Kashif and with crunching synth lines, like most of the album’s upbeat moments, it’s very much a child of its time.

Both these reissues are available now.