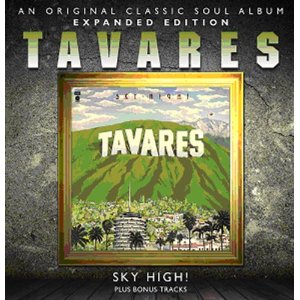 Despite being one of the best (and top-selling) groups of the 70s, the TAVARES brothers have been criminally mistreated by the reissue specialists… till now that is! DAVID NATHAN’S soulmusic.com has just released two classic albums on the Massachusetts siblings.

First up there’s their 1975 LP, ‘In The City’. Originally released on Capitol and produced by DENNIS LAMBERT and BRIAN POTTER, it’s a perfect summation of all that was good about the group. The set includes the hit ‘It Only Takes A Minute’ and some beautiful pop/soul ballads like ‘The Love I Never Had’ and ‘In The Eyes Of Love’. The 12 track CD also includes two remixes of ‘It Only Takes a Minute’.

1976’s ‘Sky High’ is the second TAVARES album to get the soulmusic.com reissue treatment. This one features the boys’ defining ‘Heaven Must Be Missing An Angel’ and ‘Don’t Take Away The Music’ (plus several remixes of both). There are also soulful versions of LUTHER INGRAMS and JOHNNY BAYLOR’S ‘To The Other Man’ and HOMER BANKS and CARL HAMPTONS’ ‘Wonderful’.

Find out more about both albums (and many more great reissues) @ www.soulmusic.com