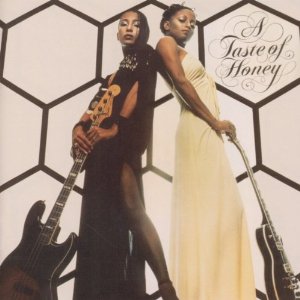 A TASTE OF HONEY are one of soul’s great misunderstood and neglected bands. To too many they are no more than a flash in that flashiest of pans – disco. Most people perceive A TASTE OF HONEY as a female duo with just one big hit – the still infectious ‘Boogie Oogie Oogie’; in reality things are different.

The band were actually a mixed gender self-contained four piece – who after gigging on cruises and in and around Southern California came to the attention of the Mizell Brothers who duly signed them to Capitol. There, in 1978, they scored a huge hit with the romping ‘Boogie Oogie Oogie’ and on the back of their debut album they won a Grammy as ‘Best New Artists’. They waited till 1981 to hit again – with a gentle, quiet storm version of an old 60s Japanese hit ‘Sukiyaki’. That one was produced by GEORGE DUKE, no less . Then, after a charming version of SMOKEY ROBINSON’S ‘I’ll Try Something New’ failed to ignite, the band split with the two main girls – JANICE JOHNSON and HAZEL PAYNE trying solo careers – unsuccessfully.

You can catch up with the TASTE OF HONEY story via a couple of reissues on the bbr label. They’ve just released the band’s first two Capitol LPs – ‘A Taste OF Honey’ and ‘Another Taste’ and though they’ve both stuffed with disco dancers (it what the people wanted in ’78 and ’79) they also offer some sweetly soulful moments – like the lovely ‘Sky High’ and with the MIZELLS and WADE MARCUS involved, you know we’re talking quality throughout. Sadly no ‘Sukiyaki’ or ‘I’ll Try Something New’… maybe they’re to follow! More details … www.bigbreakrecords.co.uk  or www.cherryred.co.uk