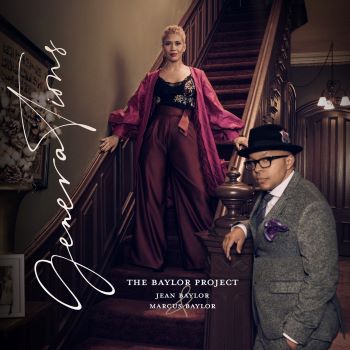 Real soul, jazz and, yes, Gospel fans will know all about American duo, THE BAYLOR PROJECT. Based in New York, its members are husband and wife Marcus and Jean Baylor. Anoraks will also know that Marcus was the drummer with the Yellowjackets while Jean was part of the ultra-successful Zhané. As the Baylor Project they debuted in 2017 with the album, ‘The Journey’ which garnered two Grammy nominations.

Right now, Marcus and Jean are gearing up for the release of their latest album, ‘Generations’ – due June 18th– right in the middle of Black Music Month. They say the long player is their sonic version of the traditional family-sewn, heirloom quilt. Quilt making has long been a tradition with black families  and as the quilts are handed down and modified through the generations, so family traditions and histories are cemented. The Baylors say that ‘Generation’s is their quilt for the 21st century; “a celebration of the universality of the human condition, viewed through the lens of the Black experience.”

Helping the Baylors patch their quilt together is an array of jazz  and gospel names – people like Kenny Garrett, Jazzmeia Horn, Jamison Ross, Sullivan Fortner and Dianne Reeves. Ms Reeves adds her exceptional vocal talents to ‘We Swing’ – the title says it all!

Like the rest of the 13 tracker ‘We Swing’ is steeped in the duo’s soul, jazz, gospel and blues backgrounds perhaps best summed up in the album opener ‘Strivin’’. Featuring Kenny Garrett, this one owes a huge debt to Ray Charles (think ‘What’d I Say’) and everyone knows how Uncle Ray melded jazz, blues and gospel to forge a new sound.

The album sees the Baylors offer some covers too, notably a version of Michael Wycoff’s 1980 ‘Love Makes Me Sing’. Here Jean’s delicate vocal is wrapped in sweet piano and lush strings. Wayne Shorter’s ‘Infant Eyes’ is also included – lyrics courtesy of Mrs. Baylor. It’s clearly meant to be one of the album’s focus cuts alongside the almost 9 minute long ‘Black Boy’ – which centres on  the age-old realities of racism in current society. The song asks questions which still need answering. ‘Becoming’ is another key cut – an obvious nod to Michelle Obama’s autobiography and dealing with the  collective process of growth through seasons of life.

Each of the eleven songs (there are two brief interludes) ask, search and reflect but that doesn’t make ‘Generations’ heavy or overtly didactic. The Baylors say: “We hope every listener enjoys this celebration and comes away with a renewed desire to honour those who came before us while positively impacting the next generation”.

THE BAYLOR PROJECT; ‘Generations’ released June 18th via Be A Light Records