TALK OF THE GRAPEVINE! 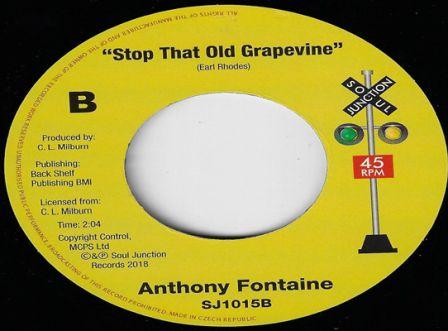 Memphis’ ANTHONY FONTAINE was one of a multitude of soul “nearly men”… “nearly” in that in the 70s he almost signed to the mighty Stax label when it was flying high. His music mentor C L Milburn was a friend of Stax’s Al Bell and Bell was keen to sign the gritty voiced Fontaine but Bell’s suggestion was rejected at the last minute and a dejected Anthony went back to the chittlin’ circuit.

Anthony Fontaine died in 2012 – maybe thinking of what might have been. He did though leave a small music legacy – some singles he cut as part of the duo Willie and Anthony (Willie was Willie Hill), but more importantly a fine 45 he cut for the aforementioned C L Milburn’s Texas label, Souled Out.

That single ‘Stop That Old Grapevine’/ ‘How Can I Lose What I Never Had’ meant little outside of Texas but over time it did mean something on the rare and Northern soul scene. It’s a hard to find the original record but now the ever-obliging Soul Junction Records have made the single available on a new vinyl 7″.

‘Stop That Old Grapevine’ is a stomping, raw, Southern soul dancer with a quirky female monologue at the start while ‘How Can I Lose What I Never Had’ is more melodic but none the less soulful and the release makes a great addition to the small but perfectly formed Soul Junction catalogue. It’s officially released September 23rd.