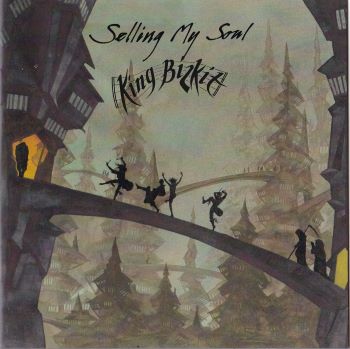 KING BIZKIT are one of the UK’s longest standing and hardest gigging soul and blues bands. Marshalled by Richard Everitt, they’ve been around since 1990 and they’ve always been a popular draw on the club and festival circuit. The band are such a popular live attraction (it’s estimated that they’ve played over 1.500 gigs!) that getting into the studio to cut a record isn’t always easy. However, the Bizkit boys have finally managed to get their long-promised album out there.

The concise 9 tracker that is ‘Selling My Soul’ is now officially available and to appreciate the band’s relentless sound (and live appeal) try ‘Don’t Quit Me Baby’ as your opener. It’s proper old-fashioned music – melding, rough Memphis soul with gutsy blues and barrelhouse jazz. The brash and brassy ‘Together Again’ and ‘A Fast One’ offer more of the same. The LP’s title cut, though, offers something very different. ‘Selling My Soul’ is a lengthy (8 minutes plus) rocky/bluesy building meander with biting guitar courtesy of Laurie Wisefield (ex-Wishbone Ash and the Tina Turner Band, amongst others).

Pandemic permitting, King Bizkit will be busy promoting the album and hoping to get back to what they do best … gigging. In the meantime, you can learn more @ www.kingbizkit.com