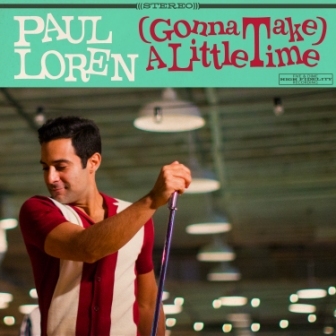 PAUL LOREN is a native New York crooner with a penchant for Blue Eyed soul. He tells us: “I started singing at 3 years old along with the little 45rpm records my mom would play and started playing piano at 4 years old. The voices I remember most and identify with are Ray Charles, Frankie Valli, Sam Cooke, Sinatra, Aretha, Otis, and Tony Bennett” and his music has always betrayed those wonderful influences.

Right now Paul’s finishing his new album and as a taster he’s just released the bouncy pop/soul tune, ‘(Gonna Take) A Little Time’. The vibe is very much mid 60s… a sort of Brill Building thing with hints of Neil Sedaka. Not surprising, the song, like the entire album, was recorded at Brooklyn’s famed Five & Dime studio on something called magnetic tape!