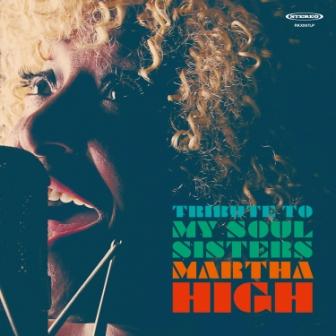 Soulstress MARTHA HIGH is probably best known for her work with James Brown. Martha worked for the Godfather for something like 30 years. Now Martha is forging a solo career all of her own and on November 17th she unleashes her newest project…. ‘Tribute To My Soul Sisters’, a collection of Ms H’s versions of soul classics made famous by some of soul’s funkiest divas like Lyn Collins, Marva Whitney and Sugar Pie DeSanto.

Indeed the first single from the album is Sugar Pie’s ‘A Little Taste Of Soul’. Funky and feisty, like the rest of the album it’s a collaboration with Japanese funk meister Osaka Monaurail.

Martha says of the record: “Given the opportunity and the pleasure to perform these songs, is my way of saying: thank you, you’re not forgotten. To record the music of the Funky Divas would mean a lot to Mr Brown. He always wanted the world to know he had powerful women on stage that could hold his crowd while he was off the stage; they were just as powerful and funky as he was.”