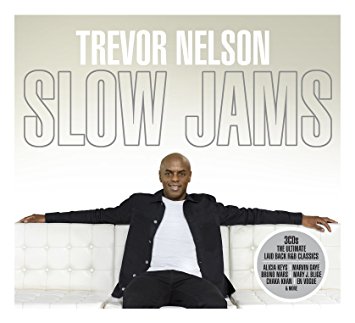 It’s become something of soul music New Year tradition – the January Trevor Nelson compilation. Since 2013, our man has helmed a successful series of soul and R&B retrospectives. Two of said collections have topped the charts and with sales of over 900,000 it makes sense to keep the tradition going!

This year, though, Trev offers something just a tad different….. ‘Slow Jams’. The brief was simple – find, compile and sequence the very best modern soul ballads and R&B slowies and over 3CDs (54 big tunes) that’s just what the award winning DJ has done. And like his best selling ‘Collection’ albums, this new album offers loads and loads of fairly recent chart riders alongside a plethora of timeless classics.

Representing the newbies are people like Bruno Mars (‘That’s What I Like’) and The Weekend (‘The Hills’); they’re cheek by jowl with legends like Marvin Gaye ‘(Let’s Get It On’) and Aretha Franklin (‘Until You Come Back To Me’). Yep, something for everybody here; the soul crew will be particularly delighted that stars like Bobby Womack, Roy Ayers, Eddie Kendrick’s, Maze, Teddy Pendergrass and the Isley Brothers are given priority.

Top tunes and favourites? Well everyone will find their own memory and emotion jerking moments amongst the generous 54 tracks. Right now we’re reminding ourselves about the romantic intensity of Joe’s ‘All The Things’ (no wonder the Beckhams chose it as their wedding song) and mourning (still) the loss of dear Amy Winehouse…. her ‘Love Is A Losing Game’ still touches a nerve.