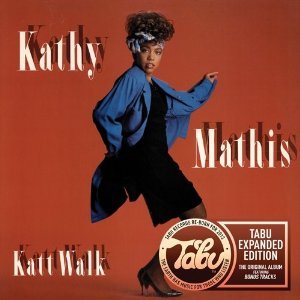 The revitalised Tabu label has just released another couple of albums from its back catalogue – both on relatively unknown female singers and both now eminently collectable.

First up is ‘Katt Walk’ from KATHY MATHIS. KATHY was born in Battle Creek, Michigan and began her singing career in the church. She moved to Atlanta in her late teens to pursue a career in secular music and released her debut ‘Katt Walk’ on Tabu in 1987. From the album, the single ‘Late Night Hour’ climbed to #40 on the Billboard R&B chart. More chart success proved elusive and after one more Tabu album she relocated to Maryland and resumed a career in Gospel.

KATHY – now using her married name, HORRY – is currently a Minister of Music in St Charles, Missouri and she still records – her last outing was the 2010 Christmas album, ‘The Gift’.

Tabu’s second new reissue is RHONDA CLARK’S ‘Between Friends’. Released in 1989, it was the St Louis singer’s debut album and it reached a respectable #69 on the Billboard R&B album chart. The set was produced by a whole bevy of hot producers, including JAM & LEWIS, JELLYBEAN JOHNSON, CHUCK HOWARD and RANDY RAN and together they managed to create a typical late 80’s electro soul soundscape. The big single from the album was the ultra catchy ‘State Of Attraction’. The sound is classic Tabu and RHONDA’S in great form. Sadly despite the single’s success – a top 10 R&B hit, RHONDA’S career never really took off. We’re told, though, that she’s still active in the music biz.