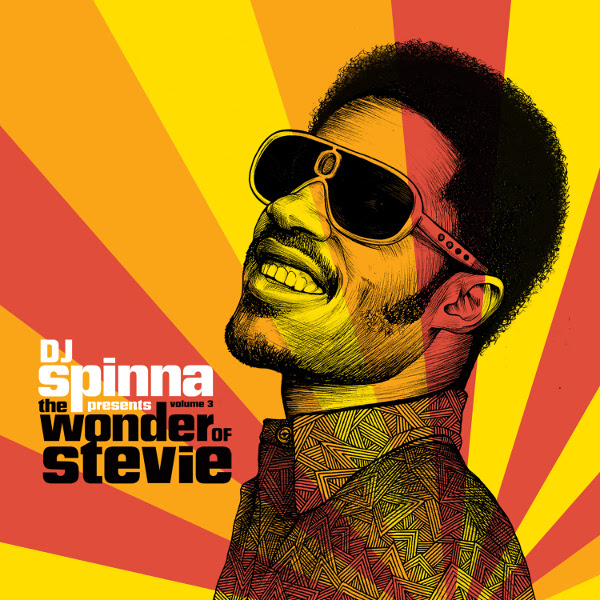 This weekend London will be celebrating the WONDER of STEVIE when the great man performs his ‘Songs In The Key of Life’ album in its entirety, at the Barclaycard BST festival in Hyde Park on Sunday 10th July.

If you haven’t got a ticket or simply refuse to pay the eye-watering prices (remember Stevie’s only a multi millionaire!) then you can catch some of the magic later that night at the Prince Of Wales, Brixton.

That’s the venue for the latest Deep Into Soul collective’s big party night… and this one is gearing up to be something really special. You see the night is the official launch night for DJ SPINNA’S latest ‘The Wonder Of Stevie’ album.

Spinna (Vincent Williams) is proud of his friendship with Stevie and he’s collaborated with the maestro on several projects…. notably remixes of ‘My Love Is On Fire’ and ‘Sweetest Somebody’ from Stevie’s 2005 ‘A Time To Love’ album. Then in October 2012, Spinna performed an opening DJ set for the “United Nations Message Of Peace Concert with Stevie Wonder”. Spinna’s also curated two ‘Wonder Of Stevie’ albums – acclaimed compilations of Wonder songs performed by a cross-genre galaxy of artists.

The third volume in the series has just been released and it wins an official launch at the aforementioned Deep Into Soul Party. The 19 song collection is a cornucopia of Wonder treasures – many are lesser known gems from the man’s song book – like ‘Just A Little Piece Of You’ (here in the Betty Everett version) and ‘It’s My Pleasure’ (offered here by Billy Preston).

Other soul giants on the album include David Ruffin (‘Make My Water Boil’), The Jackson Five (‘Buttercup’) and GC Cameron (‘If You Don’t Love Me’). There are two notable UK inclusions too – Reel People’s take on ‘Golden Lady’ (Tony Momrelle does his usual excellent Stevie inspired vocals) and Sunlight Square’s visit to ‘Pastime Paradise’.

There’s also a rock version of ‘Do Yourself A Favour’ from Edgar Winter, a proper gospel version of ‘Have a Talk With God’ from the East St Louis Gospelettes and a lovely take on ‘Bird Of Beauty’ from the US Atlantic Fleet Navy Show Band. So, yes, something for everyone.

Get up close with the album on Sunday night at the Prince Of Wales, Brixton. We’re told that Spinna will be on stage at around 10 pm and watch out for some surprise guests…. find out more @ www.facebook.com/DeepIntoSoul

In the meantime ‘The Wonder of Stevie’ volume  3 is out now on bbe Records.