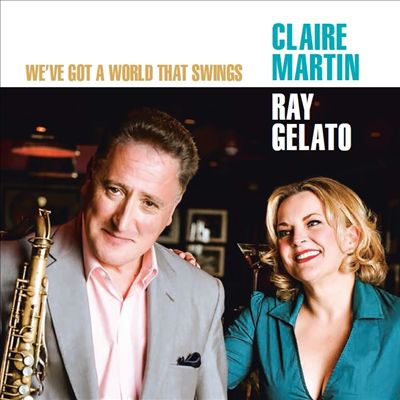 ‘We’ve Got A World That Swings’ is a brand new album collaboration between the UK’s premier jazz singer, CLAIRE MARTIN and saxophonist/vocalist/bandleader RAY GELATO and over 13 tracks, the pair pay an unashamed homage to the beauty of swing.

Claire and Ray first worked together 20 years ago, but more recently they went on the road together presenting a live show that wowed packed houses with their interpretations of some of the best tunes from The Great American Songbook. The logical end to the tour was to record a complementary album… and the set, ‘We’ve Got  A World That Swings’, hits the sales racks on May 20th.

On the album the duo are backed by an all-star trio – David Newton (piano), Dave Whitford (bass) and Sebastian de Krom (drums) and between them and Ray and Claire they find freshness and vitality in familiar material – songs like ‘Come Dance With Me’, ‘The Coffee Song’, ‘Something’s Gotta Give’ and Charlie Parker’s ‘Ornithology’. The album’s only original is Ray’s own ‘A Swinging Affair’ and it proves why the legendary jazzer is nicknamed ‘The Godfather of Swing’ (and why Paul McCartney chose him to play at his wedding!)