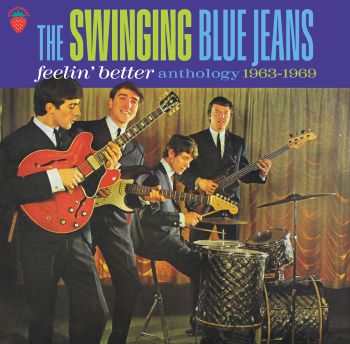 The SWINGING BLUE JEANS were a 60s Liverpool group who enjoyed five hit singles during the Merseybeat boom. However, the band predate that boom. They began in the late 50s as a trad jazz/skiffle band called the Bluegenes. The Liverpool beat explosion saw them trim down to the usual quartet line up and as The Swinging Blue Jeans (complete with a lucrative sponsorship deal with a jeans company), they enjoyed their time in the pop spotlight.

Cherry Red imprint, Strawberry, have just released a comprehensive three CD collection that tracks the evolution of the Blue Jeans and ‘Feelin’ Better’ really is a wonderful picture of a wonderful era and for soul  fans who like to collect cover versions of soul songs, the 103 track album reveals plenty of treasures.

The band are best known for their version of ‘Hippy Hippy Shake’. The Chan Romero song was a Merseybeat mainstay, even the Beatles featured it in their Cavern shows and the Blue Jeans’ 45 version climbed to number 2 in 1963. The band followed it with another rock and roll cover ‘Good Golly Miss Molly’ while  their first album featured plenty more covers of rock staples like ‘Dizzy Missd Lizzy’. But the Blue Jeans also covered plenty of soul songs too. Featured here are their versions of the Drifters’ ‘Save The Last Dance For Me’, Dionne Warwick’s ‘Don’t Make Me Over’ (a number 31 hit) and Betty Everett’s ‘You’re No Good (a number 3 hit).

In 1966 Terry Sylvester joined the group. He’d been the lead singer with another Liverpool group, the Escorts and his ability to sing lead as well as harmonize (a skill that later found him a job with the Hollies) led the Blue Jeans to explore more harmonic songs – so here you can enjoy the band’s versions of two Impressions’ songs ‘I Made A Mistake’ and ‘It’s Alright’ alongside their takes on Betty Everett’s ‘It’s In Her Kiss’  and Ruby and the Romantics’ ‘Our Day Will Come’. The Blue Jeans also covered plenty of sweet pop classics like the Lovin’ Spoonful’s ‘Do You Believe In Magic’ and Ronny and the Daytonas’ ‘Sandy’ – both tremendous examples of 60s beat group harmony. There’s also the  Blue Jeans’ version of the Beatles’ ‘This Boy’ while many of the band’s self-penned songs like ‘Now The Summers Gone’ and ‘It’s Too Late Now’ have a distinct Fabs’ flavour.

Everything you need on the Swinging Blue Jeans’ is here on ‘Feelin’ Better anthology 1963 -1969’ and it’s out now!