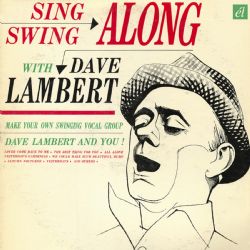 The jazz vocal trio LAMBERT, HENDRICKS and ROSS were jazz icons. Dave Lambert, Jon Hendricks and Annie Ross joined forces in 1958 and took the jazz world by storm with their album ‘Sing A Song Of Basie’. The trio were voted best vocal group in the world for five consecutive years by many of the leading music journals and the LHR sound had a deep influence on ensembles like Manhattan Transfer and jazz singers like Georgie Fame.

Ross left the group in 1962 to be replaced by Yolande Bevan but before that the two males had started to record their own albums again. Two of those LPs have just been reissued as a “twofer” by El Records. They are ‘Sing And Swing Along With Dave Lambert’ and Jon Hendricks’ ‘Evolution Of The Blues Song’.

Lambert’s album shows his skill at improvisation and underlines his importance to the development of hip, modernist jazz vocalese. The Hendricks’s set was originally written and performed at the 1960 Monterey Jazz Festival where, we’re told, his show received a 20 minute standing ovation. Guests on his album include Jimmy Witherspoon and Ike Isaacs.