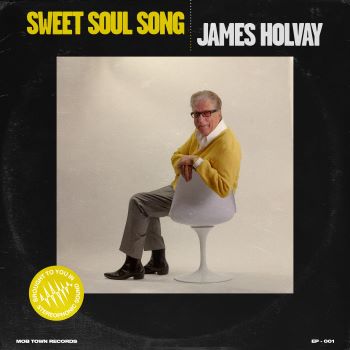 I’m guessing not too many people are familiar with the name of singer/songwriter/guitarist JAMES HOLVAY. Avid anoraks and serious collectors might know that 75-year-old James has quite a track record. He’s probably best known as the writer of a clutch of hits for US 60s band The Buckinghams. Their Holvay-penned ‘Kind Of A Drag’ is a perennial blue-eyed soul favourite. James was also a mainstay of Chicago band The Mob who peddled their take on classic Windy City soul. Through the early ‘80s, the band toured regularly and issued several singles and LPs on Colossus, Private Stock, and other indie labels. But, after 15 years on the road, the act disbanded after a New Year’s Eve 1980-81 date in Los Angeles.

Holvay then went into sales, but for him music remained, as he says: “an itch that eventually would have to get scratched”. James’ musical passion was the music of Curtis Mayfield and his coterie of Chicago performers. He’s proud that he once met the “Gentle Genius” and remembers just how humble the man was. He made a big impression on a young James (no pun intended!).

So, after something like 40 years out of music, James decided to make a comeback. He says: ““What got me started again was I began to hear Sharon Jones and the Dap-Kings and Amy Winehouse. All of a sudden I’m hearing this indie soul thing from the ‘60s coming out again. There was a whole load of these bands out there, all over the world, in Spain, Italy, England. And I said, ‘God, that’s my music!’ So that music inspired me, and the songs I was writing were in the Major Lance-Gene Chandler-Curtis Mayfield vein. That’s who I am, in my heart.”

Over the past several years Holvay put some songs together – all written in the classic Chicago style of Curtis Mayfield – and after a lengthy recording process with some of South California’s top session players, James Holvay’s big return to big time music is almost good to go. His wonderful 5 track EP, ‘Sweet Soul Song’ will be released on Mob Town Records on April 16th.

James says the EP: “is a vibrant tip of the hat to the Chicago music I witnessed and then played in during its 1960s flowering” – and, you know, our man is spot on!  He’s accurately, honestly and soulfully recreated the sounds of the Impressions, Johnny Pate, Major Lance, Gene Chandler, Tyrone Davis  and many more. The EP’s title song is a soulful homage to Holvay’s Chicago heroes. Sonically you’ll hear element of ‘It’s All Right’ and ‘The Monkey Time’ while the lyric name checks all his heroes.  ‘Still The Fool’ is a big, big ballad production that will recall Mayfield classics like ‘This Must End’, ‘Just One Kiss From You’ and ‘Need To Belong To Someone’ while the obvious reference point on ’Talking About’ is ‘Talking About My Baby’. That leaves the punchy  ‘Working On It’ and ‘Love Has Found A Way’ where you’ll hear elements of Tyrone Davis’  early Chicago work. All five cuts are remarkable in their evocation of that magic Chicago soul sound and, what’s more, they’ve received the approval of a now 97-year-old Johnny Pate. Holvay sent the Impressions producer a copy of his music and Pate was delighted; “Ah, Jimmy, that brings back such beautiful memories.” Was his reaction.

To add even more authenticity to the project, the cover is an accurate pastiche of Gene Chandler’s ‘Just Be True’ Constellation album. Check the pictures above!

And while we’ve just mentioned Major Lance… did you know that the Mayor of Atlanta, Keisha Lance Bottoms is his daughter (check he picture (below) with dad’s LP behind her!) Enough trivia! Back to James “Jimmy Soul” Holvay! His ‘Sweet Soul Song’ EP is a remarkable piece of work and I doubt if there’ll be a better retro project released in the coming year. Miss it at your peril.