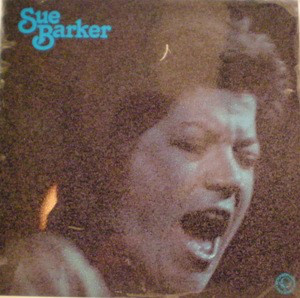 SUE BARKER (no, not that Sue Barker!) was an Australian soul and jazz singer who was active from the late sixties to the mid 80s. She released just one album, an eponymous 10 tracker on Melbourne’s Crest Records which is now fetching big bucks on the collectors/diggers’ scene. We used the past tense in the opening sentence because though Ms Barker is still alive she very consciously turned her back on music in 1986. Disillusioned and disappointed with the whole music business and its scams and double dealing, she’s now happy to pursue her other love, drawing.

Sue’ story is worth re-telling. Like many great soul singers, Ms Barker began singing in her local (Adelaide) church before attending music college. She then gigged with various bands – amongst them the Cumberlands and the Onions and it was eventually her impassioned Janis Joplin approach to music that attracted Melbourne muso, Marcus Herman, who owned Crest Records. He signed Sue to a three album solo deal and in 1976 she cut her first (and only) LP. When the album was finished Barker and Herman fell out. She was pregnant and didn’t want to follow the promotional merry go-round; he thought the record wasn’t commercial enough and his label was in financial straits.

‘Sue Barker’, the album, bombed and Sue Barker, the singer, was never paid. Sue carried on singing but after the death of her son 1986 she finally quit the business to find fulfilment elsewhere.

That, then, would have been that save that a crate digging Aussie DJ, Mark ‘Kinetic’ Egan discovered that Sue Barker’s album was changing hands for over $400 and having gotten a copy himself he uploaded one track to YOUTUBE. The cut was a cover of Curtis Mayfield’s ‘Love To The People’ and demand for the parent album rocketed.

To satisfy the demand, Playback Records have just reissued the album on CD. Musically, it’s a muscular, typically 70s mix of soul and jazz covers with the Mayfield tune standing out. Other noteworthy cuts are versions of ‘How Sweet It Is’, ‘What’s Going On’ and ‘Groovin”. The covers are respectful and just a tad different to the originals… different enough to maintain interest. What is striking, though, is Sue Barker’s vocal attack. Listen and you’ll understand why in her time people made the Janis Joplin comparison.

The reissue offers the LP’s original ten tracks alongside 3 songs recorded around the same time, so this is more or less a full retrospective on Sue Barker… the soul star who never was!