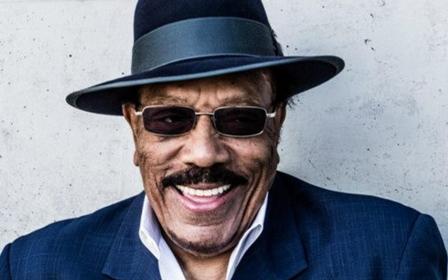 Soul man SWEET PEA ATKINSON died on Tuesday 5th May in Los Angeles. He was 74 and had suffered a heart attack. He is best known as the vocalist in Was Not Was and his nickname, said friend and music producer Chris Tian, came from the fact that he was always known as a sweet gentleman who truly cared about people

Born in Ohio in 1945, Hillard “Sweet Pea” Atkinson moved to Detroit as a young man and worked in the Chrysler car factory. He formed a band, Hi Energy, with fellow workers but soon found more work as a session singer in the studios of Detroit. Indeed it was at a studio that he met David Weiss and Don Fagenson (who both, of course, went onto use the surname Was). They were putting together a band … Was (Not Was) and recruited Atkinson straight away – they say it wasn’t just his voice but his flamboyant personal style (colourful suits and a fedora) that convinced them that he was their man.

He sang lead on the band’s biggest hits ‘Walk The Dinosaur’ (sharing with Harry Bowens) and ‘Spy In The House Of Love’ and with Was’s blessings he also recorded solo. After the demise of Was (Not Was), Atkinson formed the Boneshakers and worked sessions with people like Elton John, Brian Wilson, Willie Nelson, Paula Abdul, Michael McDonald and Solomon Burke. For many years he also worked with country star Lyle Lovett. Sweet Pea’s most recent album was 2017’s ‘Get What You Deserve’. Soul fans also have fond memories of his input on the 1997 Orquestra Was’s version of the country song ‘Forever Is A Long Time’.

Atkinson is survived by three adult children, grandchildren, and a sister in Detroit.