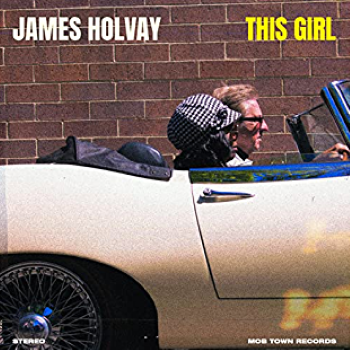 Fans of those classic sounds will be delighted to learn that James has just released another 5 song EP that once again captures the sounds and atmosphere of Chicago soul’s golden age. The ‘This Girl’ EP has just won release via Holvay’s own Mob Town Records (some might remember that James once fronted a band called  the Mob) and if you’re a fan of vintage Chicago soul you really do need to investigate.

Three of the songs on the new EP are brand new. The remaining two are new versions of songs that James recorded with the Mob. Co-written with fellow Mobster Gary Beisbier, they are ‘More Of You’ and ‘She’s Gone Away’. The former has a real Jerry Butler flavour (listen up to the Billy Stewart name check!) while the latter is a delicate ballad – both, though, perfect Chicago soul artefacts. The other three songs are ‘Hot And Heavy Love’ (which uses a choral motif from the Impressions’ ‘Minstrel and Queen’), ‘Whatever She Wants’ (a jaunty cut  that Johnny Pate would be proud of) and the EP title track (a pacey classy Impressions’ pastiche)

“Jimmy Soul”  (as Holvay is known in and around Chicago) recorded the music with a group of top-flight Los Angeles session men. He says; “It took me literally two years to find guys who could play the music. These are the road dogs — they go out with the O’Jays and the Temptations when they tour. The bass player’s main gig is in Al McKay’s Earth, Wind & Fire. The drummer is currently out with Robert Cray. They work with all those acts, so they are masters of that music.”

James is adamant that the music he makes, though retro, is totally relevant today and he cites the success of Silk Sonic’s retro flavours as proof that great music is timeless. He says: “People like this music, and it’s valid today. It’s not just some guys trying to bring back the past.” Amen to that!

James Holvay’s This Girl’ is out now and comes hugely recommended. Find out more about “Jimmy Soul” via our exclusive last year’s interview… https://www.soulandjazzandfunk.com/interviews/sweet-chicago-soul-the-james-holvay-interview/