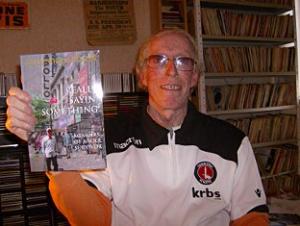 CLIVE RICHARDSON is known as one of the UK’s top soul music writers. Yet that prosaic epithet doesn’t do him full justice. Born in the deep South – Chislehurst to be precise, CLIVE was there at “the beginning” – the early 60s, when soul first started to have an impact in the UK. Living and working in and around London, he became part of a coterie that helped “spread the faith”. He played an important part in the various fan clubs which welcomed soul stars to Britain and he eventually initiated and edited the pioneering fanzine ‘Shout’. From there he went onto work for all kinds of specialist publications (including Black Echoes) and then moved into radio, working for a number of stations – legal and otherwise. He’s worked for countless record labels – helping them compile and annotate soul releases and more recently he’s been the brains behind the excellent reissue label, Shout Records. Through all this CLIVE’S remained first and foremost a soul fan and collector and his passion for the music has imbued everything he’s ever worked on.

With such a track record, it’s self-evident that there was a book “somewhere” in CLIVE RICHARDSON … and here it is. ‘REALLY SAYING SOMETHING… THE MEMOIRS OF A SOUL SURVIVOR’ has just been published by Bank House Books and for anyone interested in the development of soul music in the UK – or, more specifically, the “appreciation and acceptance of soul music in the UK”, the 200 and odd pages are a must. Though the book tracks CLIVE’S career it’s not really a biography. Rather – writing in a roughly chronological order- he offers his perspectives on a number of soul-related issues – what is was like “back in the day”, the pleasures and difficulties of collecting, the importance of fanzines and magazines, visits to the States, the rise of soul radio, the impact of the internet and so on.

The most rewarding sections are those that deal with the early days of soul’s acceptance in the UK. CLIVE writes with a real passion about all those much loved old labels like Oriole, Stateside, Fontana and Pye International and when he moves on to collecting you can almost smell and feel the mustiness of market record stalls and shops like Radio Rentals that always had racks of old 45s for sale. What I found less rewarding was the lengthy trawl through the back issues of Shout and Black Echoes, while I was surprised at how disparaging CLIVE was to some other music genres – notably beat groups and hip-hop. The 60s beat groups played an important part in turning people onto soul – most groups had a repertoire that was stuffed with soul covers; while, though hip-hop is often crass – some of it can be deeply soulful (I’m presuming CLIVE’S never heard COMMON’S ‘It’s Your World’).

That said, the book is never less than interesting. In one section, for instance CLIVE makes some revealing statements about soul guru, DAVE GODIN. CLIVE writes openly about a spat he had with DAVE – who comes over as a little less mild mannered and tolerant than we’d have once believed. Like GODIN was, RICHARDSON is a passionate expert and passion can – and will – cause division and finally, because CLIVE is that passionate expert, the book has (in places, at any rate) the feel of the anorak. I wonder just how many soul anoraks are out there who will be bothered to invest in the book.

CLIVE RICHARDSON’S ‘REALLY SAYING SOMETHING… THE MEMOIRS OF A SOUL SURVIVOR’ is out now and published by BANK HOUSE BOOKS ….. www.bankhousebooks.com