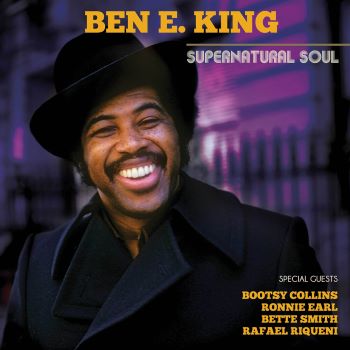 BEN E KING is a proper soul icon – one of the very few who actually merit that over used epithet. Born Benjamin Earl Nelson in 1938, his career seemed to run in phases.  Between 1958 and 1960 he fronted a run of hits with the Drifters before embarking on a remarkable solo career at Atlantic. In the late 60s his career dipped but in 1975 he made a comeback with ‘Supernatural Thing’ before once again tastes changed and King found himself on the oldies circuit even re-joining an incarnation of the Drifters for a time.

In one of his “down” periods (circa 1995) Ben E re-recorded a selection of his early hits in an attempt to secure yet another comeback but most of those recordings laid dormant as the singer failed to secure an outlet for them. Now thanks to Cleopatra Records we can now enjoy those tracks in a special way. You see the label commissioned a group of artists to work on King’s tracks and spruce them up to a contemporary standard.

Chief amongst those artists was bass legend Bootsy Collins who worked on the re- shaping  of ‘Supernatural Thing’. Then there was up-and-coming R&B artist Bette Smith who added her vocals to the new version of ‘Stand By Me’ which now also features blues guitar man Ronnie Earl. The other  notable contributor was Flamenco guitarist Rafael Riqueni who adds Latin flourishes to the take on the classic “Spanish Harlem.”

Those tracks along with other well-known King songs and a Drifters’ medley make up the Cleopatra album, ‘Supernatural Soul’ which has just been released in all formats. Now we’re not saying these new versions are up  there with the originals but they offer plenty of intrigue and interest, especially Booty’s input on ‘Supernatural Thing’ which stetches over two parts. Ben E  is in fine, soulful form throughout (yep there is the odd vocal wobble but that just adds authenticity) and the 11 tracker is a valuable part of a true soul legend’s legacy. Ben E King sadly died in 2015 but his music lives on!