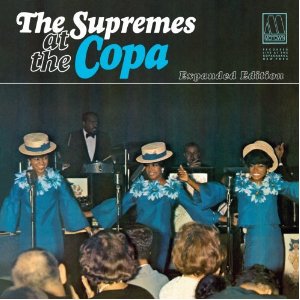 Fans of THE SUPREMES and DIANA ROSS need to watch out for two new releases – an archive CD and a brand new DVD.

The CD is a 2 disc reissue of their legendary ‘At The Copa’ live album. Recorded in 1965 at New York’s legendary Copacabana night club, the album is the only live recording featuring the classic line of DIANA ROSS, MARY WILSON and FLORENCE BALLARD. As was BERRY GORDY’S way, he was determined for his artists to break through into the mainstream market and getting his no.1 female group a residency at that famous Big Apple nighterie was an early ambition. The group’s set featured most of their hits alongside standards and show tunes like ‘Put On A Happy Face’ and ‘Somewhere’. Interestingly, they also featured a six song SAM COOKE medley. GORDY had the whole show recorded and the album was one of ’65’s best sellers. This new reissue features the original album in re-mastered format, the original edits and vocal overdubs, plus the full uncut live show as it was recorded on the night. Label is Hip-O Select/Motown/Universal.

Universal Music Catalogue are also releasing a DVD of another iconic concert – DIANA ROSS’ July 1983 performance at New York’s Central Park. The show was scheduled for July 21st and despite torrential rain over 400,000 fans turned up for the event. ROSS and her musicians struggled valiantly against the elements but the storm put an end to the concert at the half way mark. DIANA, of course, returned the next night to perform the whole show which was broadcast live around the world. Now for the first time, the concert is available on DVD… and what you get is the original rain-shortened concert and the full second night show. With special liner notes from Ms ROSS and a commentary from show director STEVE BINDER, the DVD is unmissable.