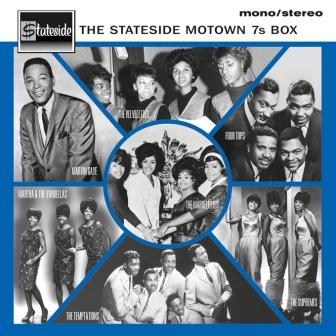 UK soul collectors know all about the dear old STATESIDE label. The imprint was founded in the early 60s by EMI as an outlet for them to issue music from American indie labels – like, of course, Motown. Originally the label was to be called Javelin. Then after Discus was rejected EMI execs hit on Stateside and their designers came up with the distinctive American dollar sign logo that is so revered by collectors.

All kinds of music was issued on Stateside but, in retrospect, the most important releases were those licensed from Berry Gordy’s fledgling Motown empire. Prior to this, Motown material had been issued on London, Fontana and Oriole, but it was Stateside that began giving Motown music a real identity.

The records are Martha & The Vandellas; In My Lonely Room / Dancing In The Street: The Supremes; Come See About Me / When The Lovelight Starts Shining Through His Eyes: The Temptations; Girl (Why You Wanna Make Me Blue) / The Way You Do The Things You Do: Marvin Gaye; Can I Get A Witness / How Sweet It Is (To Be Loved By You): The Velvelettes; He Was Really Sayin’ Somethin’ / Needle In A Haystack: Four Tops; Without The One You Love (Life’s Not Worthwhile) / Baby I Need Your Loving: and The Marvelettes; Too Many Fish In The Sea / You’re My Remedy.

Be aware, the box set is a limited edition… but what a great Christmas present!