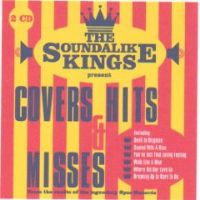 ‘Covers, Hits And Misses’ – a new double album on the T-Bird label- promises to be one of 2010’s most interesting albums. Credited to a collective – ‘The Soundalike Kings- the 48 tracker is a collection of 60s music form Spar Recordings. The label was founded in Nashville in 1961 by ALAN BUBBS and WILLIAM BEASLEY – two shrewd operators who spotted a real niche in the music market. They saw the growing popularity of the singles market and decided to make cover versions of the top hits which they’d sell – at a cheaper price than the originals – through non- specialist outlets like garages, grocery shops and drug stores. (Those old enough to remember the old Woolworth’s Embassy label will understand completely). But being based in Nashville, they were fortunate enough to have a huge pool of top musicians to perform on the records, often, it has to be said anonymously or under assumed names. So the Spar recordings featured people like BOBBY RUSSELL, BUZZ CASON, BENNY LATIMORE, FREDDIE NORTH, EARL GAINES, SAM MOORE, BILLY SHERRILL , BOOTS RANDOLPH and many more. The songs covered were the big pop hits of the day but it’s interesting to hear these top sessioneers try their hands at things like ‘Where Did Our Love Go’, ‘Slow Twisting’ and ‘It’s Alright’. That IMPRESSIONS’ classic is credited to ‘THE CHORDS’… actually soul singer THOMAS HENRY and it’s a great performance. Like I said up top, file under “interesting”.