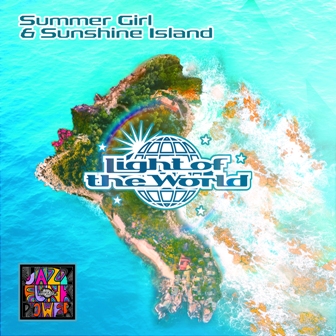 After far too long,  LIGHT OF THE WORLD came back in style a month or so back with the energized ‘Temperatures Rising’. We were told that the core band members (Gee Bello (Vocals/Percussion), Nat Augustin (Vocals/Guitar) and Mel Gaynor (Drums)) were busy working on an album – tentatively titled ‘Jazz Funk’. We’re told that the LP will be good to go on or around September 25th but while we wait the boys have decided to whet our collective appetites with a  double A sided single that combines ‘Summer Girl’ with ‘Sunshine Island’.

As the titles imply, the two tunes are easy-going summery grooves… just what we need as autumn starts to flex its muscles. Either could follow ‘Temperatures Rising’ to the higher echelons of the UK soul chart and if the rest of the album is in the same vein, it’s set to be a corker!