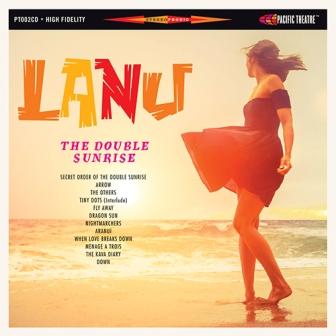 LANU is the alter ego of prolific Aussie muso, LANCE FERGUSON. Ferguson, of course, is one of the main men in antipodean soul and funk outfit, THE BAMBOOS while he also collaborates with Cookin’ On 3 Burners. Busy man, Lance also works on his own using the Lanu alias and as Lanu, he’s just released his third LP… ‘The Double Sunrise’.

The album’s title is derived, we’re told, from the golden age of aviation… when flyers en route to Europe from Australia would see two sunrises in 24 hours.

Musically, though, the album is totally contemporary with guest input from vocalists Megan Washington and Melanie Pain. The overall sound is a lot less funky than the typical Bamboos/Lanu flavour. Here expect something a lot more down tempo… exotic even, like the light Latin flavoured ‘Arrow’ that’s already picking up airplay.

LANU’S THE DOUBLE SUNRISE is out now on Pacific Theatre Records.