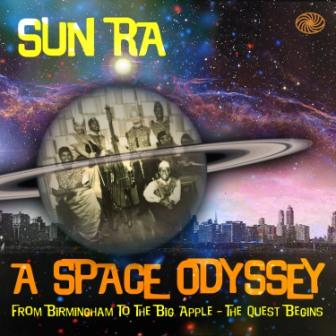 Born in Birmingham Alabama, SUN RA (born HERMAN POULE BLOUNT) was a prolific musician – across all kinds of genres. He also peddled a unique line in what he called “cosmic philosophy” that was often at odds with his eclectic and unorthodox lifestyle. From the mid 50s to his death in 1993 he led a band which he called THE ARKESTRA through which he preached his crusade of peace, self-knowledge and individual determination – a quest that convinced him that he was a direct descendant of the Egyptian sun god.

You can catch up with the early part of SUN RA’S journey on a new three CD box set from Fantastic Voyage Records. ‘Space Odyssey’ begins with the music HERMAN crafted chiefly in Chicago with people like CLARENCE WILLIAMS, WYNONIE HARRIS and RED SAUNDERS; then the box looks at his early solo work and collaborations with artists like JUANITA ROBERTS. Intriguing, beguiling and never easy, it offers some clues to the mystery that was SUN RA. No one has ever fully bottomed the man ….but this collection goes some of the way.