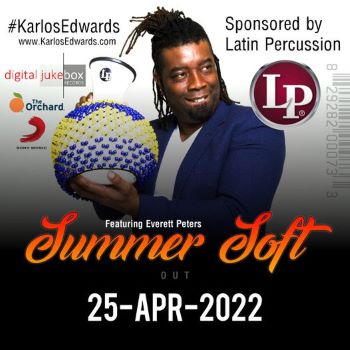 KARLOS EDWARDS is a UK musician whose roots are in the Pentecostal church. A love of soul, especially the magic of Earth Wind and Fire drew young Karlos to secular music  and soon his skills as percussionist/drummer found  him work with people like Aztec Camera, Robert Plamer, Take That, Olly Murs, Will Young, Loose Ends, Beverly Knight, Mark Ronson, the Brand New Heavies and many more!

Right now we’re told that Mr E has decided to release a solo album of “original material”. However, he’s about to release a single which we’re guessing is from that album and it’s actually a cover – but a rather special cover… his take on Stevie Wonder’s ever-lovely ‘Summer Soft’. Karlos gives the tune a light Latin makeover supporting a heartfelt vocal from Everett Peters and listen up to the great piano break towards the end. It’s out April 25th.