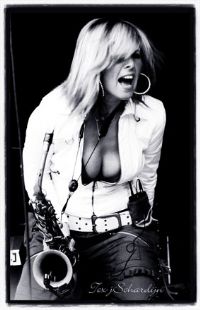 Summer’s brought a slew of smooth jazz releases – here’s the pick of the crop… organized by label:

ARTISTRY – two fine sax albums on this label – RICHARD ELLIOT’S ‘Rock Steady’ and JACKIEM JOYNER’S ‘Lil’ Man Soul’. The former is a tight 11 tracker that features great covers of Curtis’ ‘Move On Up’, Aretha’s ‘Rock Steady’ and Eddie Kendricks’ Keep On Truckin”; the latter is a looser affair but there’s still plenty of soul-based grooves – notably ‘Step With Me’.

NU GROOVE – the New Jersey based label continues to expand its catalogue and now offers a pair of very different guitar sets. ‘The Brain Tarquin Collection’ is (obviously) a collection of US guitar star, BRIAN TARQUIN’S best work between 1996 and now. There’s a strong rock influence in here but soul people should check out the cover of the O’Jays’ ‘Darling Darling Baby’. TORCUATO MARIANO’S ‘So Far From Home’ is a very different affair. There’s a more acoustic feel to the album and a strong Latin influence too.

HEADS UP – lots of new releases from the Cleveland company. First up there’s ‘Free Your Mind’ from prolific sax man WALTER BEASLEY. Beasley fans will know exactly what to expect but for quiet stormers there’s a pleasing vocal duet between Beasley and Lynne Fidmont – ‘Love Calls’. More ultra-smooth sax on MARION MEADOWS’ ‘Secrets’ and a fair share of vocal cuts too … Highlights? … a version of Bobby McFerrin’s ‘Friends’ featuring Brian Chartrand, a relaxing ‘Shade Tree’ with Impromp2 breathing the lyrics and ‘Here To Stay’. The latter – with Brian Chartrand on minimal vocals again – could please sophisticated modern room dancers. There are a couple of laid back vocals on guitar man CHUCK LOEB’S new ‘Between 2 Worlds’ album. ‘Oh No You Don’t’ features LIZZY LOEB while a cover of JOBIM’S ‘So Tina De Que Ser Com Voce’ has CARMEN CUESTA on lead. The album also features a tribute to HIRAM BULLOCK and a cover of JAMES TAYLOR’S ‘Mean Old Man’. SPYRO GYRA’S new ‘Down The Wire’ is … well, another SPYRO GYRA album. BEKENSTEIN and the boys plough the same old grooves on eleven self-crafted tunes. Nothing new there then! More of an oddity is CANDY DULFER’S new album – or should we say albums…The Dutch sax star has just released a new double album called ‘Funked Up Chilled Out’ with one CD devoted to groove-based, almost funky tunes with other odd flavours (skank and rap) in the mix and the other consisting of, obviously, more laid-back tunes of which ‘Sunrise’ is worth checking out. CANDY’S second release is simply ‘Funked Up’. It consists of most (but not all) of the tunes from the first CD in the double pack along with a smattering of cuts from the second CD. Confused? I’m sure you must be!

ACE – Ace’s BGP imprint has just reissued the JAMES TAYLOR QUARTET’S second album for Acid Jazz. ‘A Few Useful Tips About Living Underground’ was originally released in 1996 and, yes, we know it’s not smooth jazz … in fact it’s an edgy and aggressive album reflecting TAYLOR’S dissatisfaction with Acid Jazz at the time. The original eleven tracks are boosted with the addition of three cuts that have only ever been available in the US before – of which film fans will already know ‘Austin’s Theme’ from the MIKE MYERS movies. Worth investigating.