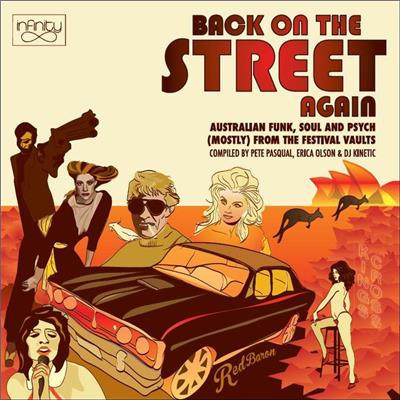 ‘BACK ON THE STREET AGAIN’ is the title of a never less than interesting 20 track compilation from Australia’s Festival Records. The album collects together a mixed bag of sounds from Australian artists of the 60s and 70s. They range from top jazz drummer John Sangster to cabaret artist Al Styne, heavy rock bands Tamam Shud and Blackfeather through to more soulful performers like Jeff St John who fronted a band called ID. Their contribution here is a Northern flavoured stomper, ‘Feel Awright’ .

Other cuts to interest soul folk are Ray White Revival’s funky cover of Stevie’s ‘Superstition’ and Billy Thorpe’s ‘Back On the Street Again’ for which the album’s named. That one by the way is a ‘Shaft’ influenced slab of psycho-soul.

BACK ON THE STREET AGAIN… is out now on Festival Records.