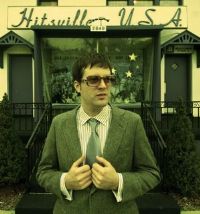 2009’s been a vintage year for retro soul albums – now stand by for what those in the know are saying will be acclaimed the best of the lot! MAYER HAWTHORNE hails from Ann Arbour, Michigan – a soulful shimmy from Detroit, where as a white kid he immersed himself not only in the sounds of his own Motor City but also the magical music of Curtom and Stax. The 29 year old began making his own music and he soon came to the notice of the wonderfully named PEANUT BUTTER WOLF (honest!) head of the Stone’s Throw label. The achingly-fragile-voiced HAWTHORNE was signed and his debut set is almost with us. Called ‘A Strange Arrangement’ the music has big echoes of Motown and the inspired feel of the Impressions, the Esquires, the Notations, the Natural Four, the Mad Lads and Leroy Hutson. Add to all that some tight J Dilla inspired modern beats and – in places – Beach Boys style harmonies and you have a hugely intriguing album. The set’s first single – ‘Just Ain’t Gonna Work Out’ – is available from August while the album is out in September. Full review on www.soulandjazzandfunk.com very soon.