STRAIGHT TO THE TOP! 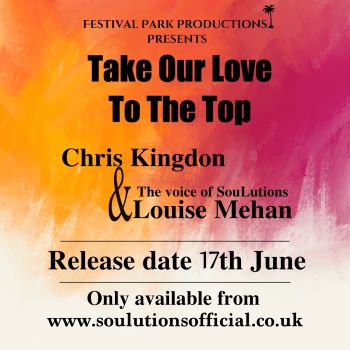 The North East’s LOUISE MEHAN has one of the most recognizable, distinct voices in British soul. Fronting the ever-inventive SouLutions, we’ve enjoyed her talents on countless modern soul classics.

For her next release Ms M sort of steps out of the SouLutions confines to add her charisma to a tune by Chris Kingdon. You’ll know that Chris a top UK instrumentalist and producer, maybe best known for his work with Stuart Mather. Now, it seems that recently he created a sweet little instrumental track that he just felt would be great for SouLutions to work on.

So he sent it off to the Geordie band and by coincidence, Steve Lee (SouLutions man man) had just penned some lyrics which magically fitted the metre and tempo of Chris’s tune – thus ‘Take Our LoveTo The Top’ was created and with that lovely Louise Mehan voice fronting it, the tune is a proper tasty affair… soulful with  a twist of retro  even a garnish of Philly but it’s that’s lovely voice that works the magic. Great stuff!