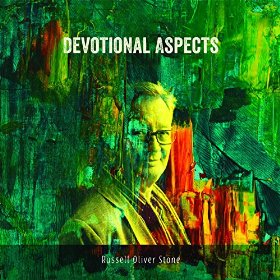 RUSSELL OLIVER STONE is a true soul survivor. Soul veterans will remember his 1976 hit – ‘We Do It’. Credited to R & J Stone (R, Russell; J his wife Joanne), it was a deserved world-wide hit. Tragically, with real success beckoning, Joanne died from a brain tumour and Russell’s mental state spiralled downward.

After a long period of rehab (which included taking an MA in Transpersonal Psychotherapy and Counselling) Russell made a musical comeback in 2013 with the album ‘Love Aspects’ which was followed 12 months later with ‘Groove Aspects’. The albums were the first two instalments in a trilogy which the singer/songwriter had planned to help him through his problems and in May he releases the final chapter in the story.

The new album is called ‘Devotional Aspects’ and musically it’s very different to the first two sets. Where ‘Love Aspects’ was essentially a set of late night balladry and ‘Groove Aspects’ was an up-tempo, jazzy, funky affair, ‘Devotional Aspects’ moves more into World Music – though retaining a soul undertow. As the denouement of Russell’s musical pilgrimage, he’s the first to admit that the 12 tracker’s not an easy listen; “Some of the songs aren’t easy… but that is the point. This is not all easy listening. It is very rewarding and some of the tracks are without doubt joyous”.

The album’s two key cuts are the self-explanatory ‘Joanne’s Lament’ and ‘Stop Thief’. Both clock in at over nine minutes and through them Russell explains that he’s “able to lay the ghost of my late wife to rest. To express the hurt and the pain that I felt back then and the only way I can do that now is because of my emotional stability and groundedness. If we acknowledge our own pain it allows us to feel the pain of others and then feel the connection with those who are suffering right now”.

On other tracks there’s exquisite harmony to enjoy. Try ‘Come To Me’ – a master class in layered harmonies but even here there’s a potent message in the music – a message through which Russell Oliver Stone is exorcising his ghosts.