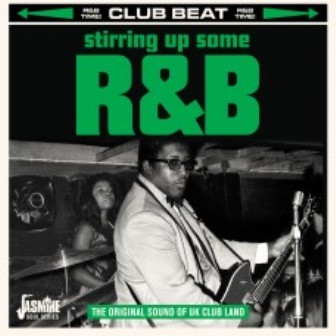 Reissue label JASMINE RECORDS have just issued two wonderful archive compilations under the “Stirring Up” banner… one is ‘Stirring Up Some R&B’, the other ‘Stirring Up The Dance Floor’.

The former offers a snapshot of the sounds that might well have been played out in the UK’s soul and jazz cellar clubs in the late 50s and early 60s (that’s if they had been released over here!) Biggest name on the album is the genius that was Bo Diddley. A true icon, his track is ‘Bring It To Jerome’ – his homage to his maraca man,  Jerome  Green. Soul buffs will also recognize names like Fontella Bass (with ‘Honey Bee’), Ted Taylor (with ‘Don’t Lie’) and Titus Turner (with ‘Big Mary’s’). Other album highlights include The Blenders with ‘Graveyard’ (issued over here on Sue Records), The Pentagons’’ ‘I Wonder’ and the Kingpins’ crazy instrumental ‘Amazing Dr Funk’. These and the rest of the generous 25 tracks were the kinds of sounds played out at places like Soho’s Flamingo club and Richmond’s Crawdaddy where they were to influence  people like Georgie Fame, Alexis Korner. Mick Jagger, Chris Farlowe and  a whole generation of mods.

‘Stirring Up The Dance Floor’ is another 25 track collection of cuts that would have been popular in the early mod/soul clubs (places like the aforementioned Flamingo, the Marquee, the 100 Club, Manchester’s original Twisted Wheel and Liverpool’s Sink Club). However the sound here is generally embryonic soul – just a tad smoother than barrel house R&B but still raucous in places… bluesy even. Not too many big “names” here… there are contributions from James Brown and Marv Johnson but that doesn’t make contributions from the wannabees and also rans any less worthwhile. Amongst the highlights here are the swing jazz number ‘San Diego Bounce’ (which dates back to 1949) and the Drivers’ ’Mr Astronaut’ –a nod to the space travel craze of the early 60s.