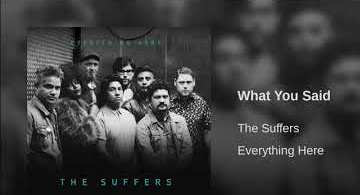 Back in March we were mightily impressed by the album ‘Everything Here’ from old school soul band THE SUFFERS. The band describe themselves as “a contemporary version of the great R&B/funk bands of 70s and 80s….Rufus, Earth, Wind & Fire, Kool & The Gang” and on the evidence of ‘Do Whatever’ nobody could argue.

Key track was the gorgeous ‘Do Whatever’ but running it a close second was ‘What You Said’ – an urgent little soul outing that showcased the feisty vocal prowess of lead singer Kam Franklin. That cut has now been issued as a single in a brand new ‘Boogie Back’ mix and it really works – driving, energized and up for anything! Its available to download from wherever right now!