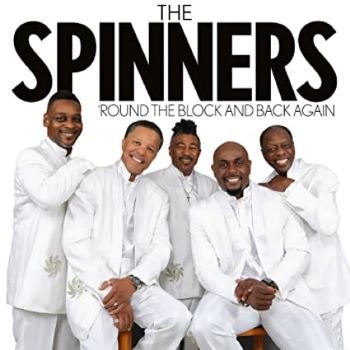 All proper soul fans have a soft spot for the SPINNERS and though the groups’ Golden Age is long gone, a group of “Spinners” is still making music. The group is marshalled by last surviving original member Henry Fambrough and last year we were delighted to discover three “new” tracks by the group. The recordings weren’t actually new. They dated from 1991 and were recorded by an almost classic line up of Bobby Smith, Henry Fambrough, Billy Henderson, Pervis Jackson and John Edwards.

Soul entrepreneur Preston Glass was behind the recordings, and we’ve learned that Mr G is back working with the new line up (Fambrough, Jessie Peck, Marvin Taylor, Ronnie Moss, and CJ Jefferson) on a whole album, ‘Round The Block and Back Again’ due  later in year. As a taster Preston and the Spinners have just released the first single – ‘Cliché’ . The tune is a pleasant, group harmony workout featuring Glass’s signature light production touch. We have to say that it’s not quite up there with the Thom Bell produced classics but it’s still good to hear a vintage soul group in full flight – sweet, well-honed harmonies and alternating lead vocals… what’s not too like?