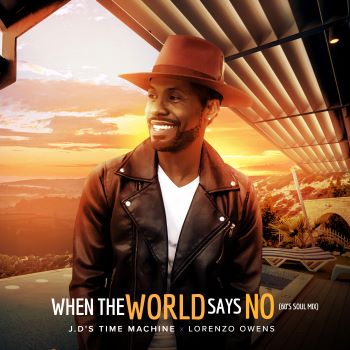 JAMES DAY is getting plenty of excellent mileage from his latest tune… ‘When The World Says No’. It is of course credited to JD’s TIME MACHINE and features a big vocal from LORENZO OWENS.

We’ve already been treated to, at least, three mixes, including a great Boogie Back tweak and now, proving a great song can be done in any genre, JD and his team offer ‘World’ in two new, very different mixes.

First up there’s a “60s SOUL MIX” which has a lively acoustic flavour and features plenty of atmospherics brought on by infectious handclapping! Then there’s an “80s FUNK MIX” – which is just that… crunchy, beaty and with plenty of electro FX.

‘When The World Says No’ has already reached the Top 10 on all major international indie soul charts and is now starting to make inroads Stateside. The new mixes are sure to accelerate its US trajectory! Out now