STILL OUTSIDE THAT BOX! 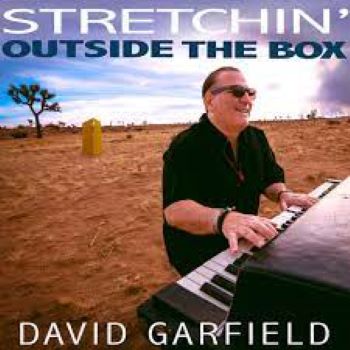 Eagle-eyed record sleeve readers will recognize the name of DAVID GARFIELD. The garlanded keyboardist has been in the music business for 50 years, starting way back, working with jazz icon Freddie Hubbard; he then worked on numerous projects that took him deep into other musical genres. More recently he’s been the faithful MD for George Benson while he’s also collaborated with Smokey Robinson. Clearly jazz and soul has always been where David’s at and over the last few years our man’s been releasing a series of albums that reflects just that .. and a whole lot more!

The series title was ‘Outside The Box’ and the sixth and (David says) the final instalment has just been released  and it really is an epic collection… hence the marquee title ‘Stretchin’’ . The music really does stretch – 24 tracks over 2 CDs with a cast of Cecil B De Mille proportions. Here’s just a few of the musical luminaries helping Mr G deliver his ‘Stretchin’ ’vision – Gearld Albright, Eric Marienthal, Chuck Loeb, Marcus Miller, Kirk Whalum, Paul Jackson Jr., Rick Braun, the Brecker Brothers and Nathan East while the core band  features a team of top session players, such as Steve Gadd, Greg Phillinganes and David Paich.

The 24 tracks are a mixture of originals and covers, with many of those covers being tributes to David’s  musical heroes and/or people he’s worked with  like Herbie Hancock, Joe Sample, George Duke, Jaco Pastorius, Stevie Wonder, even Tom Petty! Sonically expect soul grooves, jazz fusion, funk and classic, adult pop.

Garfield says: “Many of these tunes are unedited and full of inspired jamming. The music on this album is the closest to what I consider my comfort zone”. The album’s good to go from September 27th via Creatchy.