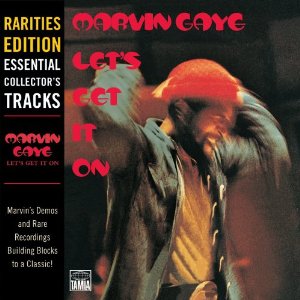 In 2001 Motown/Universal released a stupendous deluxe version of MARVIN GAYE’S iconic ‘Let’s Get It On’ album. The two CD set naturally featured the classic LP’s 8 tracks but the rest of the collection offered soul fans a wonderful insight into GAYE’S art and creativity in the early seventies. There were discarded outtakes from the ‘Let’s Get It On’ sessions, there were demo recordings, alternate mixes, live recordings and two special versions of ‘Just To Keep You Satisfied’ – from the ORIGINALS and the MONITORS respectively.

If anyone missed the set at the time, Motown have just reissued half of the collection under the tag “Let’s Get It On Rarities Edition”. Essentially, it’s the second CD from that deluxe pack and it offers plenty of demos, lots of those alternate mixes and the cuts from the MONITORS and the ORIGINALS. Standouts? Well, the instrumental, ‘Mandota’ cuts a tough groove while the alternate take on ‘Where Are We Going’ is every bit as good as the mix that was eventually released. Equally, the alternate mixes and demos of ‘If I Should Die Tonight’, ‘Distant Lover’ and ‘Come Get To This’ serve to enhance the stark beauty of the originals. Though they’ll have all the tracks already, GAYE completists will surely want a copy and anyone who hasn’t heard these remarkable recordings yet MUST investigate.