STILL DRIFTING AFTER ALL THESE YEARS 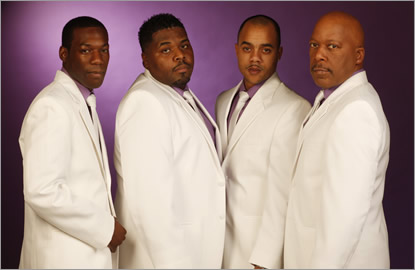 It will come as no surprise to learn that the legendary DRIFTERS are returning to the UK for another lengthy tour. This time, though, the tour is a little different because for the first time in a long time the group will be promoting new material. In September Sony Music are releasing a new greatest hits collection… but the set will include two new tracks recorded by the current line-up – MAURICE CANNON, DAMIAN CHARLES, MICHAEL WILLIAMS AND RYAN KING. The two new cuts are ‘I Still Haven’t Found What I’m Looking For’ and ‘Do You Dream Of Me’

The 14 date tour kicks off at Wentworth on September 4th then goes on to venues all across the country. Go to www.thedrifters.co.uk  for precise details. Though, through the years over 60 vocalists have featured in the DRIFTERS, the group’s heritage, values and traditions have been sympathetically handled by the TREADWELL family who have been involved with he group since their inception in 1953. As ever, the TREADWELLS are keen to point out that their DRIFTERS are the only performers with any official links to the great line ups of the past. In every way the new foursome are carrying the flame borne by the likes of CLYDE MCPHATTER, BEN E KING,  RUDY LEWIS and JOHNNY MOORE