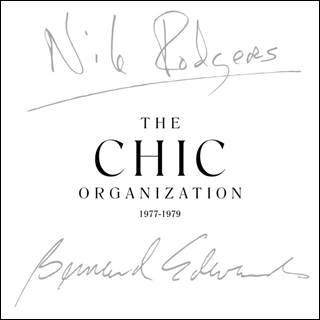 With Nile Rodgers and CHIC about to release a brand new album, ‘It’s About Time,’ on September 28th, Rhino, owners of the group’s Atlantic catalogue, have announced that  they’ll be issuing a box set called ‘The Chic Organisation 1977-1979’ on November 23rd. The set – which comes in 5-CD and 6-disc vinyl formats – includes freshly remastered versions of the group’s seminal first three albums: ‘Chic,’ ‘C’est Chic,’ and ‘Risque.’

Exclusive to the vinyl set is a replica of the band’s first 12-inch single, ‘Dance Dance Dance (Yowsah Yowsah Yowsah),’ which was initially released as a one-off on Buddah Records before Atlantic signed the group to an album contract. Rhino have used the original, much bassier, Buddah mix, which Niles Rodgers contends is superior to the Atlantic version.

Sister Sledge’s totemic LP from 1979, ‘We Are Family,’ helmed by Chic’s Nile Rodgers and Bernard Edwards,  is also included in the set along with a disc of 7-inch single edits and 12-inch remixes.

Nile Rodgers and Chic will be performing some of their greatest hits as well as new material on their UK arena tour this December. The dates are as follows:

Tickets are available from https://www.livenation.co.uk/artist/nile-rodgers-tickets