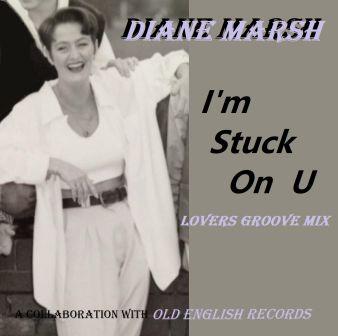 Here at SJF we first heard DIANE MARSH in her own right in 2015 via her easy-on-the-ear ‘Promise’. We subsequently learnt that Diane was no newcomer. In fact, the girl from North West England has a long CV that includes work with people like Odyssey, Kleeer, Jimmy James and the Vagabonds, Adina Howard and the legendary Edwin Starr…. which brings us to Di’s “latest offering”…. a “LOVERS GROOVE” mix of ‘I’M STUCK ON U’.

The song is a real oldie…. in fact it was first recorded in 1996 as collaboration with Andy “Madhatter” Holmes of Old English Records and, oddly, it’s never been properly released. Over the last few months, though, the cut has been played out on a few soul stations and interest and demand has grown and grown. So Diane has final decided to release it via her own website…. www.dianemarsh.co.uk . It’ll be out on December 19th and Ms M is dedicating it to the memory of her late mother. Is it worth investigating? For sure… it’s a tight and sprightly Brit soul groove… sensual, soulful and recommended!