STEPPIN’ CLOSER TO THE DELLS… 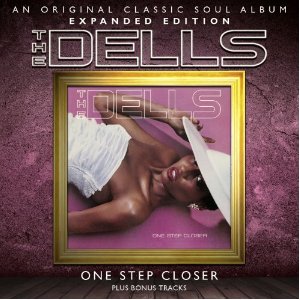 Releases celebrating THE DELLS’ 60th anniversary continue apace with soulmusic.com’s reissue of the group’s Private I, 1984 LP ‘One Step Closer’. The album was recorded in Chicago and California with most of the album produced by the then hot team of CHUCK JACKSON and MARVIN YANCY. The album yielded three singles – ‘You Just Can’t Walk Away’, ‘Love On’ and the LP’s title cut – all of which managed to dent the R&B hot 100. There’s also an interesting remake of ASHFORD and SIMPSON’S ‘I Am Your Man’ – a song originally recorded by BOBBY TAYLOR and the VANCOUVERS and then the 4 TOPS. This soulmusic.com reissue offers the original album’s 9 tracks along with three bonuses – single and club edits of ‘You Just Can’t Walk Away’ and ‘One Step Closer, while the sleeve notes feature perceptive quotes from DELLS main man, CHUCK BARKSDALE.