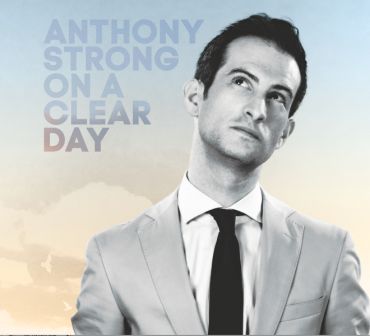 ANTHONY STRONG is an acclaimed and award winning British jazz singer, who, oddly is better known overseas than in his native UK!

He’s signed to French label, Naive Records and in France, where he’s known as “The English Gentleman”, he’s a big star… his last album release there making the front page of Le Figaro. That same album topped the US I-tunes jazz chart while in China he headlined the Shanghai jazz Festival! Not bad for a guy who’s pro career began as an understudy in West End musicals!

For the past two years – between compelling live dates – Anthony’s been recording his new album and when ‘On A Clear Day’ is released in the UK in late May, jazz tastemakers are betting that Anthony Strong will quickly become a “name” in his homeland.

The 12 tracker consists of covers of everything from jazz standards to classic pop, soul and Motown. Anthony says it’s like a cross-section of his record collection and to help him flesh out his musical ideas he recorded the set with a 20 strong big band that included Seb De Krom, Nigel Hitchcock, Gareth Lockrane and the cream of the London session scene.

People will make obvious comparisons to Michael Bublé, but listen harder and you’ll hear that Anthony’s arrangements and attack are much more adventurous than Michael’s. Try to grab a listen to his version of Stevie Wonder’s ‘Higher Ground’ or Michael Jackson’s ‘Don’t Stop Till You Get Enough’ to understand. If we need to make any comparison then maybe Anthony’s style is closer to Harry Connick Jnr’s… but, hey, as the French, the Chinese, the Americans and its seems the whole world know Anthony Strong is very much is own man!