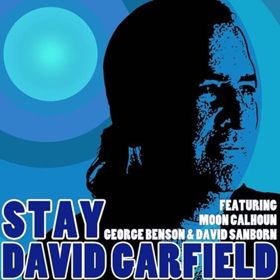 Back in April we featured veteran keyboardist DAVID GARFIELD and his intriguing long player ‘Jazz Outside The Box’…. a star studded long player that featured people like Poncho Sanchez, Steve Jordan, Randy Brecker, Tom Scott, Michael McDonald, Eric Marienthal, Brain Auger, Airto Moreira and, poignantly, Chuck Loeb and Larry Coryell. More name dropping – well David is also long serving MD for George Benson and the guitar giant joins David on his latest single – and incendiary version of Rufus’ ‘Stay.’ The cover also features someone called David Sanborn while the vocal is taken by sometime Rufus drummer and the song’s writer, Moon Calhoun. Sadly Calhoun was paralyzed in a bike accident 25 years ago and although he can no longer play drums, he sure can still sing!

Benson and Sanborn take turns on the cut’s solos while the other players include Eric Marienthal on tenor and Tower of Power’s Doc Kupka on baritone; Paul Jackson Jr. (rhythm guitar), Vinnie Colaiuta (drums), Freddie Washington (bass) and Lenny Castro (percussion). ‘Stay’ is a taster for Garfield’s next album project ‘Jammin’ Outside the Box’ which is out on Creatchy Records on June 15. That one (name dropping again!) has input from (amongst others) Smokey Robinson, Michael McDonald, Ray Parker Jr., Oleta Adams, Phil Perry, Marcus Miller, Kirk Whalum, and Rick Braun and of course the legends we’ve already listed.

We’ll bring you a full and fulsome review just as soon as we have our copy!