STAYING IN A SOULFUL DIRECTION…. 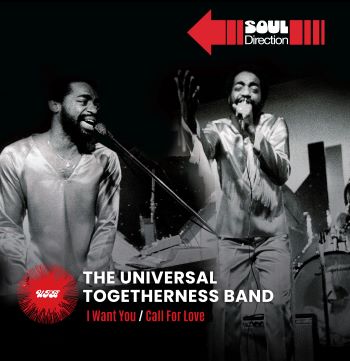 Consistent boutique soul label SOUL DIRECTION have lined up two more intriguing releases for imminent release. First up there’s  a lovely 7” from  THE UNIVERSAL TOGETHERNESS BAND. Soul anoraks will know that at the core of the band (which hailed from the Chicago area) were brothers Andre and Arnold Gibson. Andre handled the vocals and the keys while Arnold played drums and piano. The other band members were Paul Hanover – Piano, Harmonica & Backing Vocals; Fred Misher – Bass Guitar, Vocals; Leslie Misher – Lead Guitar; Louis Sanford – Percussion and another vocalist – Dawn Brooks.

The two cuts on the new Soul Direction single are ‘I Want You’ and ‘Call For Love’ . The former isn’t a cover of the Marvin Gaye song, rather it’s a sweet and gentle mid-tempo groove that builds and builds. The latter is a more complex outing with a jazzy feel delivered by some crazy Herbie Mann style flute behind the vocal. The Soul Direction people think the tracks were laid down between 1979 and 1982 and  the sound is certainly redolent of that era. They were first released by The Numero Group in 2014 and now Soul Direction offer ‘em newly remastered on 7” vinyl.

The second new SD release features another cult band, FATHER’S CHILDREN. They hailed from Washington DC and were originally a harmony group, The Dreams. Band members came and went with the usual regularity and in the era of Vietnam War protests, Civil Rights marches and the evolution of the Black Muslim movement the band became political with some members embracing Islam; thus the Dreams became Father’s Children. In the early 70s the band’s core was  Nick Smith, Billy Sumler, Ted ‘Skeet’ Carpenter, Michael Rogers, Donald Radcliff and  Jackie Peoples. Some discographies will  list the members’ later Muslim names.

In 1972 they signed to Fly Enterprises and recorded two tracks, ‘Everybody’s Got a Problem’ and ‘In Shallah’ but sadly the label went bust and that seemed that was that but manager Robert Hosea Williams kept the master tapes from those sessions and the tracks were eventually released on a 2011 Numero Group album.  Now with full permission and licensing, Soul Direction are releasing ‘Everybody’s Got a Problem’ and ‘In Shallah’ as a 7” single, ‘Problem’ is a powerful piece of work  about political conflict surrounding the Nixon administration. It even boasts a spoken discussion at the fade out. ‘In Shallah’ is quite different – sweet with a lovely harmonic flavour that might recall bands like the Friends of Distinction. The song’s title means  “Allah wills” or “God willing” and it reflects the band’s then influences and beliefs.

Father’s Children went onto release an album on Mercury in 1979 and in 2005, after a long hiatus, some of the band reformed for another LP.