STAYING IN A SOULFUL DIRECTION… 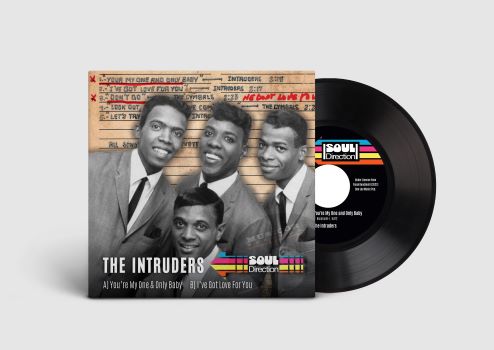 Ever-reliable boutique label, SOUL DIRECTION are lining up the February release of two quality singles from two very different groups – the legendary INTRUDERS and the almost unheard of 4 MASTERS. The link between them  is that they were both recorded in Philadelphia during the city’s musical  hey day while the four actual tracks that makeup the two vinyl 45s were both produced by garlanded Philly producer/writer FRANK BENDINELLI and recently Soul Direction’s head boy ALAN KITCHENER struck  a deal with Frank to make some of his archive material available.

All proper soul fans/collectors know and love the Intruders. They formed in 1959 as a quintet but soon trimmed to a foursome – Phil Terry, Robert (Big Sonny) Edwards, Samuel (Little Sonny) Brown and Eugene Daughtry. Philly myth tells us that the group won their first record contract after singing down the phone from the barber shop (where “Little Sonny” and “Big Sonny” both worked). That impromptu session won the Intruders a deal with Gowen Records.

In 1963 the boys switched to Benn-X Records / B&L under the auspices of Frank Bendinelli and Leroy Lovett. They cut a single ‘Dance Boy’ / ‘Let’s Try It Again’ which never got past the acetate stage. Undaunted, Frank and Leory had the boys cut three more tracks –  ‘I’ve Got Love For You’ , ‘Ain’t I Good Enough For You’ and ‘You’re My One & Only Baby’ and , it seemed, they scored a deal with Mercury to release the best two as a single. Sadly  that never happened  and the tracks stayed in the vault… till now! Soul Direction, working with Bendinelli, have had ‘You’re My One & Only Baby’ and  ‘I’ve Got Love For You’ remastered  and they’re the two sides that make up the new Soul Direction 45. The  former is an up-tempo item that is classic mid 60s Philly group soul while  the latter (which  was written by someone  called Leon Huff!!!) mines a similar vein. Two great  tunes from a great band who were just getting into their soulful stride!

The second new Soul Direction 7” features an (almost) unknown entity, the 4 Masters. Frank Bendinelli has told the SD team that they were a group of session men who also worked as The Swinging Phillies, The Mohawks, and the Rockmasters and at times the members numbered people like Bob Brown, Joe Renzetti, Stanley Gaines, Leon Huff and Phil Hurtt.

The A side of the new single is a sweet ballad, ‘Pretty’ which features a soaring falsetto from Phil Hurtt (who wrote the song) supported by sweet harmonies and a lush Philly production. The putative B side is a tougher affair and a little rough round the edges but a wonderful early Philly artefact . Lead vocalist is Andrew Smith. For the anoraks, both tracks were recorded on February 27th, 1965 at Sound Plus Studios in Philly.

So, Soul Direction get into 2023 with two hugely collectable vinyl singles. The label’s product always sell out fast (little wonder!) and both the Intruders’ 45 and the 4 Masters disc will be ready for pre-order very soon. Find out more @ https://soul-direction.co.uk/