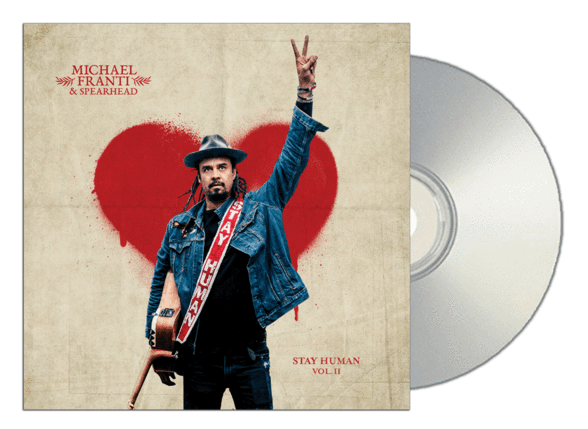 In what promises to be one of the first big albums of 2019, MICHAEL FRANTI and SPEARHEAD have announced the release of a brand new album. ‘Stay Human Volume II’ will be available, we’re told, from 15 February and is a tie–in with Franti’s new self-directed film, ‘Stay Human’. The movie tells the stories of heroic everyday people who helped the singer to discover more deeply what it means to be and “Stay Human”.

The ‘Stay Human’ film will be premiered in the UK on EITHER 14 or 15 January (date to be confirmed) at London’s Bush Hall. The screening will feature an introduction by and Q&A with Franti, as well as an acoustic performance by Franti accompanied by Carl Young (bass, vocals) and Victoria Canal (keys, vocals).

Regarding the movie and the new album, Michael says: “I’ve travelled the globe making music and throughout the years I’ve always hoped that it could inspire small steps towards making the world a better place. Struggling with the challenges of the world I began filming my new documentary, Stay Human, telling the stories of heroic everyday people who helped me to discover more deeply what it means to be and STAY HUMAN.”

Though the new album (released on Thirty Tigers) will not be officially available till 15 February, pre-orders are being taken and come with instant downloads of the album tracks ‘Just To Say I Love You,’ ‘Stay Human 2’ and ‘Flower In The Gun’.

Franti sees both new releases as part of his ongoing community work- notably his foundation (in conjunction with wife, Sara) Do It For Love – a wish granting non-profit organization that brings those with life threatening illnesses, veterans and children with severe challenges to concerts.