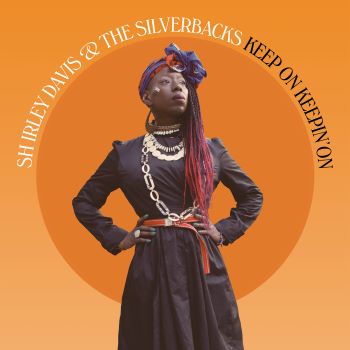 SHIRLEY DAVIS is a London-born soul sister who moved to Australia aged 16. There she embarked on a music career, becoming a sought-after backup singer for all the major international soul acts that were touring down under.

Returning to Europe, she got to know the late, great Sharon Jones working with her on her European tours. That led to a linkup with Tucxone Records who made Shirley the singer with their house band  The Silverbacks.

The ensemble has had some ups and downs – most seriously when Ms D  was hospitalised for months with a viral infection. Now, though, all is fine,  and Sharon and the Silverbacks are all set to release a new album – ‘Keep On Keepin’ On’, a title in homage to the advice given to Shirley by Sharon Jones.

The album is out soon but the  first single has just been released – a pairing of ‘Stay Firm’ with ‘Culture Vulture’. ‘Stay Firm’ is a 60s flavoured , brassy soul outing; lyrically a plea for patience and resilience in the face of adversity. ‘Culture Vulture’ rides a tight groove and offers more instant appeal. Lyrically this one addresses the ongoing conflict between art and business in music. Interesting! Out now via Lovemonk Records.